Santa Casa Alfama is back for two more days in which people meet their music: fado. On the 23rd and 24th of September, some of the best fadistas of today will pass through the various stages spread across the mythical neighborhood of Alfama.

And some of these places are already part of the festival’s own history, as is the case of Centro Cultural Dr. Magallanes Lima. At this stage, the proposals are diversified, showing that fado is not closed in on itself and also makes up for what it receives from others. This eclectic program is carried out with the names of Rogério Charraz, with “O Fado no Coreto”, and Né Gonçalves, with Soraia Cardoso as a guest, on September 23, and Agir and José Manuel Neto, with Rão Kyao as a guest, on the 24th of September. 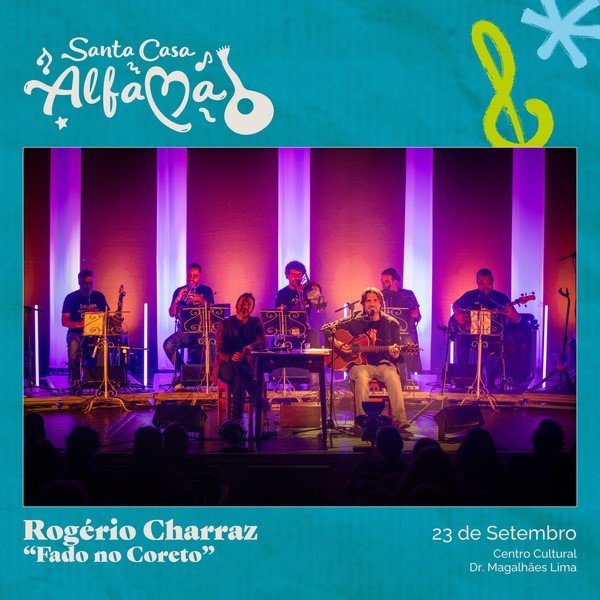 Rogério Charraz will take some of his latest work, “O Coreto”, to the stage at this year’s Santa Casa Alfama. This project was born out of Rogério’s long-standing fascination with bandstands as a cultural symbol and architectural element. It is a record that is a love story with several pages between the lines: the disenchantment with everyday life in the city, the portrait of life in the villages, the asymmetries between the coast and the interior, the dilemmas of those who part and who stays… And it is worth saying that fado also met with “O Coreto” and invaded the love story of Ana and Sebastião, the narrative of the record made with music by Rogério Charraz, with lyrics by José Fialho Gouveia and musical production by Luísa Sobral. Romaria do Coreto arrives at Santa Casa Alfama in a show specially designed for the great Fado festival. On the 23rd of September Rogério Charraz takes some friends from the house: Vânia Duarte, Bruno Chaveiro and Marco Oliveira join the songs of “O Coreto”. “Quando Nós Formos Velhinhos”, “Feita Deste Chão”, “Abaladiça” and “A Romaria” are just some of the themes that will mark the night of September 23, at Centro Cultural Dr. Magallanes Lima. 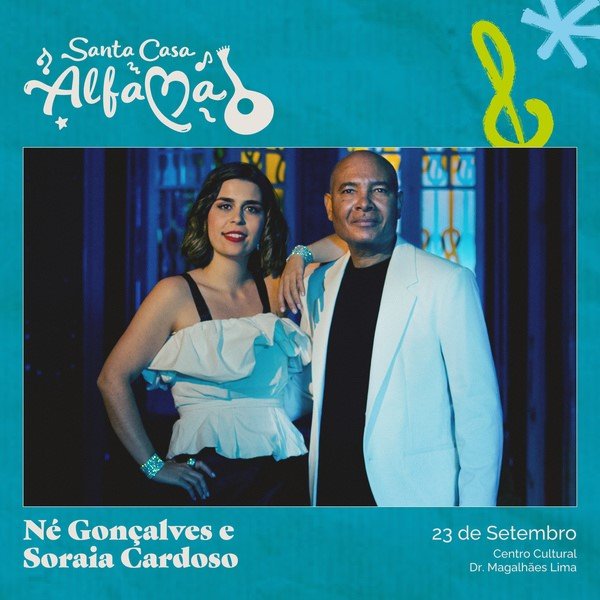 Né Gonçalves is a lawyer (he was the first President of the Angolan Bar Association), university professor, honorary consul of Finland, activist for various social and humanitarian causes, and a recognized lover of the Arts, possessing an estate of Angolan contemporary art. As a musician and music creator, his work includes the albums «Luanda Meu Semba» (1994), «Luanda Meu Semba – Instrumental» (2012), «Sembamar» (2016), and «Undenge Wetu» (2022), in addition to of other important contributions such as the songs he made for the soundtrack of the film «Na Cidade Vazia», directed by Maria João Ganga, or the film «Kalunga, O Mar de Angola», by Bernardo Gramoxo. Throughout his career, Né Gonçalves has worked with several important names in international music, such as Mariza, from Portugal, the Peruvian producer Jorge Cervantes and, more recently, with other great names in African music, such as the Cape Verdean Tito Paris and the Angolan Yuri da Cunha. In this concert prepared for Santa Casa Alfama, the Angolan musician invites Soraia Cardoso, the Portuguese fado singer with whom he partnered in “Voo do Fado”. In addition to this theme, the two will also perform “Velha Esperança”, previously recorded by Né Gonçalves with the participation of Mariza. Several songs from his previous albums, “Luanda Meu Semba” and “Sembamar” will be part of the repertoire, as well as from his brand new album, “Undenge Wetu”, released in Portugal in October. By joining different sounds with the aesthetics of fado instruments and voices, Né Gonçalves and Soraia Cardoso will unite arts from different quarters, in the lusophony space, and make multiculturalism the dominant note, reinforcing the empathetic look between peoples. This unique moment takes place on the 23rd of September on the stage installed at Centro Cultural Dr. Magallanes Lima. 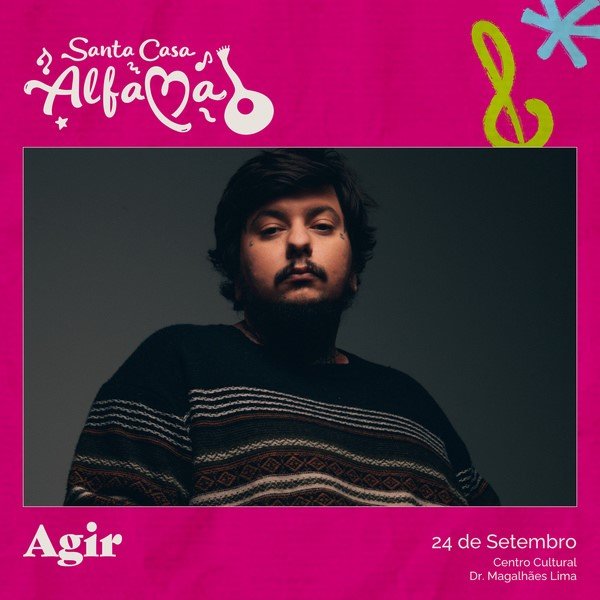 AGIR is one of the most renowned artists of his generation, being a constant presence on radio playlists with his solo songs and several collaborations with some of the biggest names in national music such as Ana Moura, Carolina Deslandes, Diogo Piçarra, Karetus, Papillon or 9 MILLER. In his career, there are several achievements, including three sold-out Coliseums, the “Best Portuguese Act” award at the 2015 MTV EMA, the Golden Globe for “Best Individual Performer” and the Platinum award for the album “Leva- Seriously”. AGIR’s new work is born from a concept, different from all the previous ones, in which music and melody were the basis of the composition: now it is from the word that the music grows. The sound also differs from anything that this musician, singer, songwriter, and producer, who is only 33 years old, has already done: we got used to the rhythm of his songs and now we are invited to reflect, to listen carefully to the details of the acoustics of instruments such as the bass, guitar, drums, sometimes piano and even an accordion. There are strings and woodwinds, delicate arrangements, and a spartan approach to recording and editing: almost all the songs are the result of recording in a single take, without disguises or tricks, with the assumption of small flaws, which are true and human. In the concert scheduled for this year’s edition of Santa Casa Alfama, the public is invited to discover the fadista vein of one of the great names of new Portuguese music. AGIR works at Centro Cultural Dr. Magalhães Lima, on September 24th. 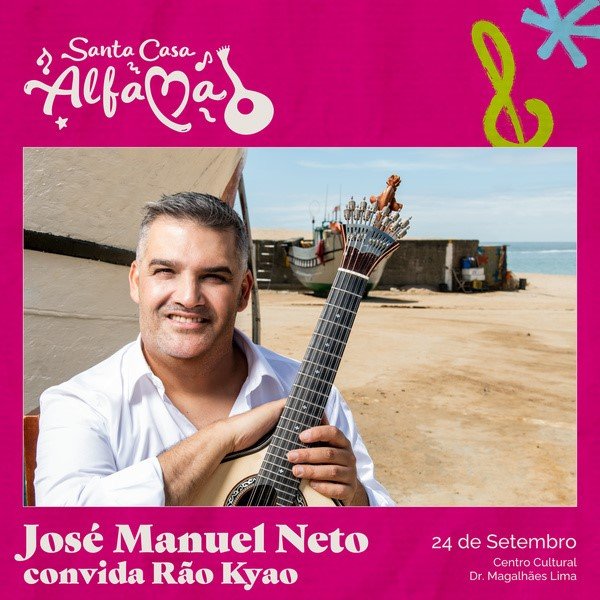 José Manuel Neto is unanimously considered one of the greatest guitarists in the history of fado. Endowed with an advanced technique, with a unique sensitivity and creativity, he is in the line of other outstanding artists who have written the history of the Portuguese guitar. His career is closely linked, in shows and recordings, to names such as Carlos do Carmo, Ana Moura, Camané, Mariza, and Ricardo Ribeiro, among others, having already performed on the biggest national stages and in some of the most emblematic venues in the world. In his own name, José Manuel Neto is writing some of the most beautiful pages in his history. This multi-award-winning artist takes the stage to demonstrate all his virtuosity and creativity, traveling through traditional repertoire, themes from his first album “Tons de Lisboa” and new compositions from his new work. Carlos Manuel Proença on viola, Bernardo Moreira on double bass, Pedro Santos on accordion, and Ruca Rebordão on percussion are the four magnificent ones that accompany José Manuel Neto and allow him to reveal all his mastery. This is a show that has Rão Kyao as a special guest, promising moments of pure magic and also the unveiling of many surprises and news – it takes place on September 24, at Centro Cultural Dr. Magallanes Lima. 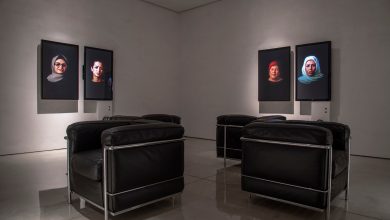 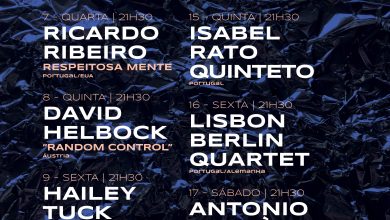