The exhibition ‘Branco Luz’ by Joana Vasconcelos opens Thursday in Paris, and the Portuguese artist considers that exhibiting in less traditional places opens ‘the public to the artistic milieu’, increasing “the intervention of art in society “.

“The established structure says that the artist should exhibit in a gallery or a museum. Obviously here [in the Bon Marché warehouses] we are transgressing the tradition, but instead of closing the artistic milieu, these places open audiences to the artistic milieu. contemporary art, the more you view, the more influence you have and the more you change your way of thinking. To come to these most unusual places for contemporary art is to broaden your intervention in society, “said the Portuguese artist in the French capital.

The exhibition of Joana Vasconcelos in the Bon Marché is officially inaugurated on Thursday and is patented until February 17, including one of its Valkyries with 30 meters that covers the main staircase and three floors of this Parisian warehouse, as well as its windows which overlook some of the most prestigious streets on the left bank of the Seine.

The Valkyrie, a recurring figure in the work of the Portuguese artist, has this time the name of Simone, inspired by both the political and activist Simone Veil and the writer and philosopher Simone de Beauvoir, women whom Joana Vasconcelos considers “great French characters“.

“It is the idea that there are women who mark their culture and transform it, bringing a new perspective to the culture they are in. The idea of transformation is what interests me, women who in their time transformed through their perspective. projection on my part was what I liked to do in my time, “explained the artist.

This time it is an entirely white Valkyrie – inserted in the traditional white month of the Bon Marché that in the last four years has called some of the most prestigious artists of contemporary art to exhibit in their space – interlacing knitting, crochet and LED that involves the course of the customers of this French shop.

“There is an interaction of techniques between ‘craft’ and technologies, we mix two things that exist in the world separately. We build big things with a technique that uses the hands,” said Joana Vasconcelos, revealing that this project took about two years to be completed, had the contribution of more than 60 people and that about ten people came from his atelier for assembly in the French capital – which has been going on since the beginning of the year.

For Vasconcelos, it is a return to its origins. Born in Paris, where she lived until four years old, and educated in Portugal, the artist admits that this would be the second city, after Lisbon, where she could live because of the relationship that maintains the French capital at various levels.

“My relationship with Paris is very intimate, personal and, at the same time, professional. I was born here 47 years ago and all this time I’m putting here two pieces: one that is the ‘Heart of Paris’ Clignancourt, where I was born and where my heart began to beat, and I’m coming to the Bon Marché, which is an iconographic site of French history where I integrate here a dimension of luxury, of the social, ” said the Portuguese artist.

The “Heart of Paris” project was chosen by the inhabitants of the 18th district and by the City Hall, with an inauguration scheduled between the end of January and the beginning of February.

The artist does not forget the difficulties experienced by her parents in the transition between Portugal and France and considers it “a privilege” to have been born and raised in a democracy.

“I am the first batch to be educated from the first class in democracy in Portugal and that means a great privilege and now, at my age, who has given value to this democracy and the country we have, is in prominent places in what It is in my generation that the country is put back on the map, just as the Portuguese of the diaspora also have important places and look at Portugal in another way, “said the artist.

Joana Vasconcelos opens an exhibition on February 14 in Serralves, Porto, and in the following months, she will exhibit in Cologne, Germany, Edinburgh, Scotland, Rotterdam, Holland and Madrid in Spain. 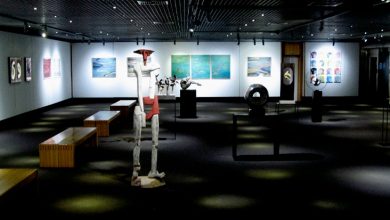