It is not long before we know if Maria Mendes will be one of the winning artists of the coveted Latin Grammy. The 21st Annual Latin Grammy Delivery will take place next Thursday, November 19th, in Miami and can be followed here.

Portuguese singer Maria Mendes has just been nominated for a Latin Grammy in the category of Best Musical Arrangement for the song “Asas Fechadas”.

The credits for arrangements on this theme are shared by Maria Mendes and John Beasley, a pianist and orchestrator with a career spanning over four decades linked to names as diverse as those of Miles Davis or Diane Reeves and Steely Dan.

The subject in question, made famous as an important part of the repertoire of Amália Rodrigues, is the only one in Portuguese language nominated in this category. Original by Alain Oulman and Luís Macedo, it features an arrangement by the Mendes/Beasley duo that is performed by the Dutch orchestra Metropole Orkest.

The creative process adopted by Maria Mendes and John Beasley implied changes in the original harmony, melody and rhythm of fado so that, and according to the Portuguese artist, “a majestic and glamorous Jazz sound in the style of a film scene could be contemplated in the new arrangement for formation of chamber orchestra”.

Maria Mendes has planned for the spring of 2021 a “Close To Me” tour in Benelux with Metropole Orkest (winner of 4 Grammys) and John Beasley (winner of Emmy and nominated for Grammy Jazz). The duo should also, in 2021 and 2022, lead a tour with several European orchestras, including a date at the Matosinhos Jazz Festival in June 2021.

The Porto singer released last year Close To Me, her third album, which features American producer and pianist John Beasley and the services of the largest jazz symphony orchestra in the world, holding 4 Grammys, of the 19 nominations so far received, Metropole Orkest.

Starting from a special repertoire chosen mainly among some of the greatest classics by Amália Rodrigues, but also by Carlos Paredes, and Mariza or Mafalda Arnauth, Maria Mendes added to the line-up a pair of originals from her work and a song that was offered by Hermeto Pascoal, a true Brazilian music giant that Miles Davis once described as “the most impressive musician in the world”. 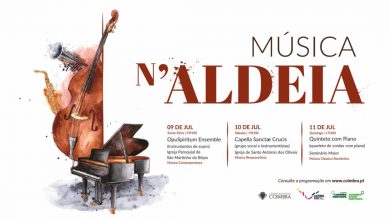