Next November, the Super Bock in Stock is back, as we always know it, to fill Avenida da Liberdade de Música!

The long awaited return of Super Bock in Stock! During 2 days of the festival, the public is challenged to see and discover more than 50 artists, in more than 10 rooms spread along Avenida da Liberdade and adjacent streets, in a movement that is made to the rhythm of music and, this year, with a flavor of normality.

The new confirmations that complete the 2021 Festival poster, which they have already called the most beautiful in the city, make the edition that marks the return after a year of interregnum even more unmissable, and reach us not only from Portugal, but also from across borders:

From London arrives us the rising rapper, singer and songwriter, Jelani Blackman, whose resume already counts, namely, with the presence in the last EP of Gorillaz published this year, in the theme “Meanwhile”. He will perform at Bloco MOCHE (Capitólio), the room dedicated to urban rhythms, like the Portuguese Lon3r Johny and T-Rex. 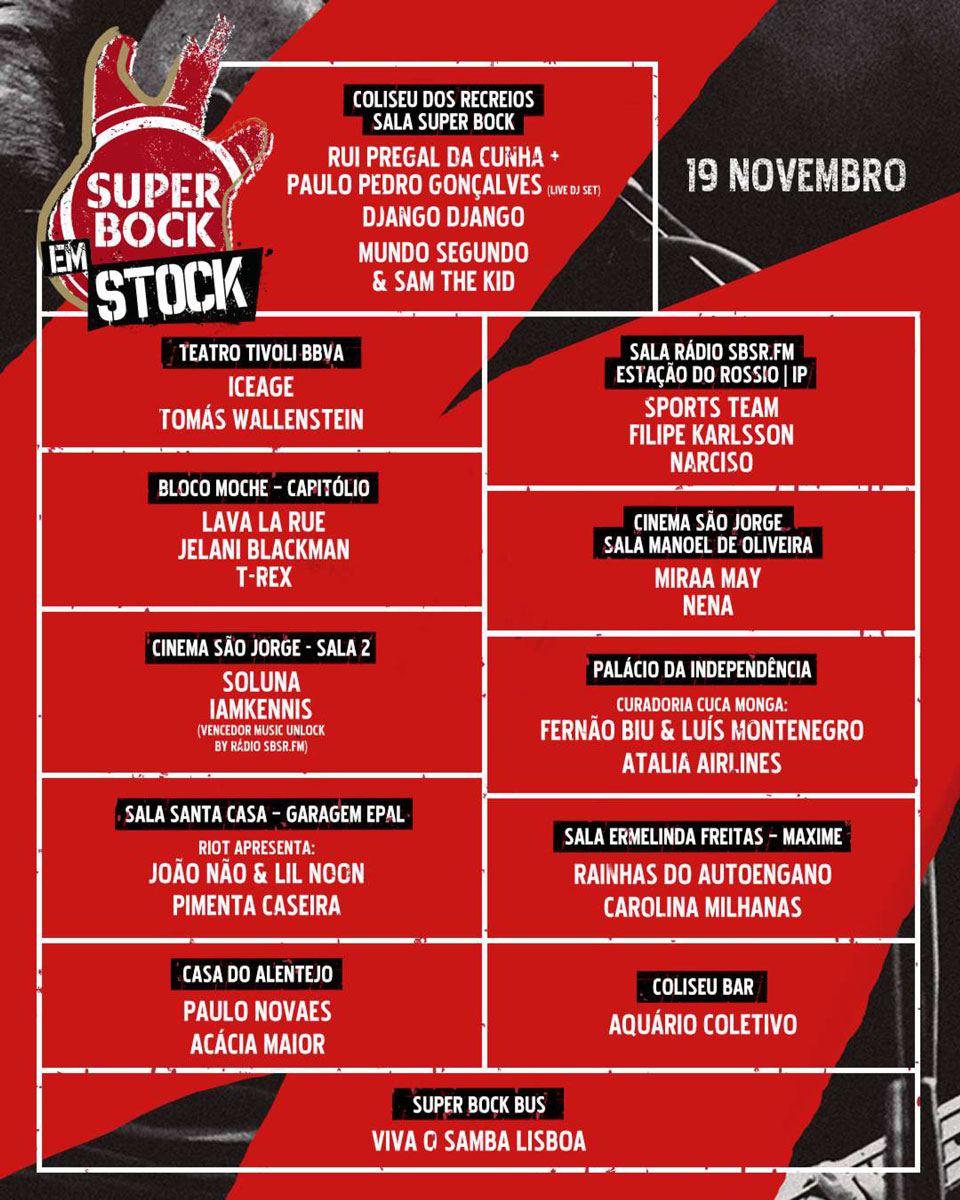 Brothers in rap, Mundo Segundo & Sam The Kid share their complicity with us on the Coliseum stage, the Sala Super Bock.

The Sala Santa Casa, at Garagem Epal, is once again a stage for new values ​​indicated by artists with established careers. RIOT introduces us to João Não & Lil Noon and Pimenta Casaira. Samuel Úria, in turn, recommends that we meet Jónatas Pires and Monday.

The Coliseu bar will once again be a space for the sounds provided by DJ sets, offered by Aquário Coletivo, BECO DJs and Ricardo Mariano & Tiago Castro (Radio SBSR.FM).

The composer, singer and instrumentalist born in São Paulo, Paulo Novaes, returns to Lisbon to perform at Casa do Alentejo. In this same room, also from Brazil, the intervening voice of Bia Ferreira will embody the themes of her new EP coming out around the Festival.

The Ermelinda Freitas Room, in the emblematic Maxime, will receive the jazz of Elas and Jazz, the Queens of AutoEngano formed by the Portuguese Madalena Palmeirim and the Brazilian women residing in Lisbon, Zoe Dorey and Natalia Green, the singer-songwriter from Porto, Nuno Lanhoso and the talented young woman Carolina Miles.

Sala 2 of Cinema São Jorge receives the mixture of Latin rhythms with Afrobeats from the Argentine and Angolan descendant based in Portugal Soluna, the Hip-Hop Edition winner of Super Bock Music Unlock IAMKENNIS, the themes of Cláudia Pascoal’s debut album, and the fusion of hip-hop and soul in the smooth, melodious voice of Lila, 2020 winner of #OneStep4MusicFest’s Singer Contest.

‘A small creature from a pop forest’ Bejaflor, will open hostilities on the second day of the SBSR.FM Radio Room at Rossio Station. 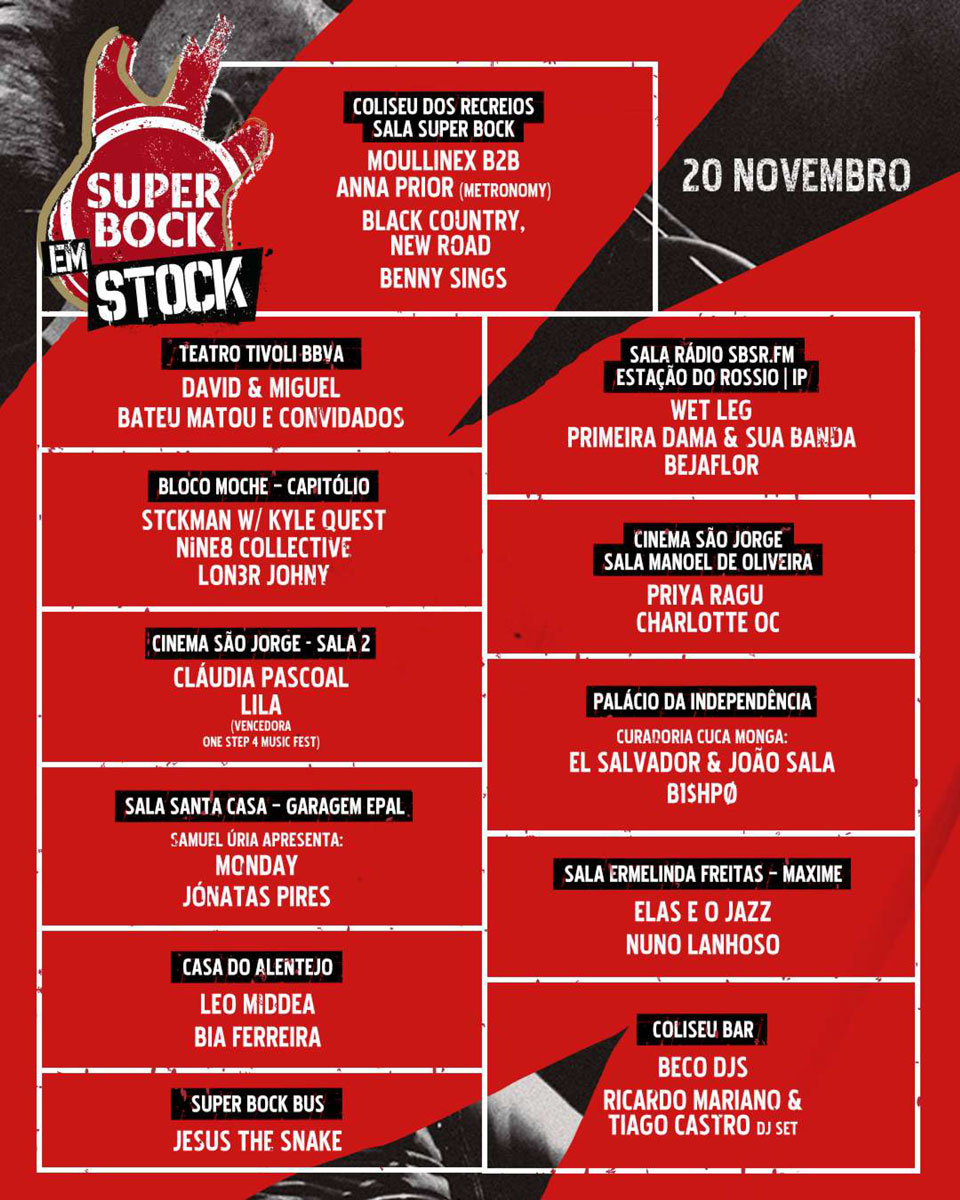 Finally, the Super Bock Bus, both a service bus and a stage for the Festival, will transport the audience to the sound of Viva O Samba Lisboa on the first day and Jesus The Snake on the second.

This completes the concert poster for the 2021 edition of Super Bock in Stock. The poster for days and rooms is now available at superbockemstock.pt.

A year of interregnum is also a year that desirably leads to reflection. It is from this motto that Radio SBSR.FM Talks arise, which bring precisely this reflection to Super Bock in Stock, with the sharing of learning and experiences, under the theme “The return music in the post-pandemic”.

Thus, Sala 3 of Cinema São Jorge will receive 2 panels per day, each with 3 guests, moderated by an SBSR.FM radio animator:

What role did the pandemic play in gender discrimination in popular music? Did confinement affect women and men equally? Will the return to normality tend to blur asymmetries or should everything remain as before? Women from different generations and performances in the music world talk about their articulation between work and personal life in the pandemic context, and about their experience in an environment where stereotypes persist.

How not to reach the spotlight. Context or Option? – James Castro

Because the “spotlight” is no longer what it used to be, the question arises as to what really matters in a band’s journey and even in the context, from the media to new forms of music editing. What obstacles does a band face on their way to reaching the mass audience? And who wants to remain on the margins, what attention can they get from the specialty media and publishers?

After years of precariousness, how to design a different future? – Paulo Lazarus

Identify and understand the weaknesses of the music industry in Portugal with the help of professionals in the field, to discuss and try to launch clues and new, more organized and fair ways of distributing artistic work, in this specific case, in the music world. So that those who work in the most varied areas of the industry and make a living from music, can ensure immediate and permanent means of subsistence whenever, for any reason, the market suffers a more serious setback.

Music Radios in the Digital Age. What changes after the pandemic? – Ricardo Mariano

Radio, like Rock ‘n’ Roll, has had its death announced for a long time. However, and on the contrary, the ether-thing remains as a vehicle of unsurpassed sharing, assuming itself current and adapting to modern days. Even so, the pandemic has shaken all communication structures: has the radio changed just like those who work on it? And in these days of digital abundance, how did the radio react and adjust the director/radialist?

The festival once again features “environmentally friendly” reusable cups – a differentiating concept introduced by Super Bock in Portugal in 2016. The cups bear the image of Super Bock in Stock and are a souvenir for anyone who wants to take them home.

This year, the value of the cup – €1 – will revert in full to União Audiovisual. In this way, Super Bock makes a new contribution to helping professionals in the sector who are still going through difficult times. 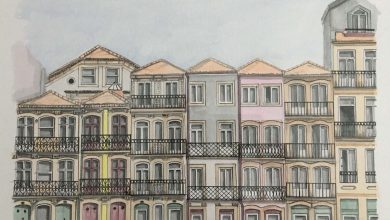 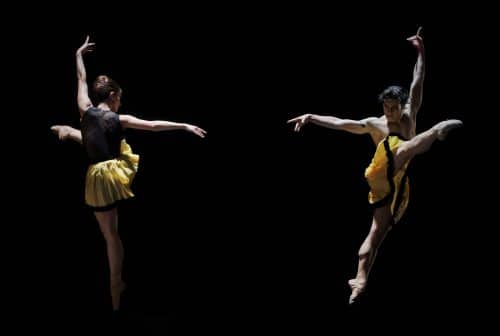