Mehdi Taremi’s hat-trick gives Porto the victory after starting to lose in Tondela.

FC Porto adds another victory, the fourth in a row, beating the home team by 1-3 in Tondela, but the blue and white team even started losing, Neto Borges, at 4 minutes, scored following Salvador Agra’s free-kick.

Porto reacted well to the disadvantage and Taremi and Evanilson were close to restoring equality, and at 20 minutes the Iranian would score, with the assistance of João Mário.

Tondela was still digesting the first, and Undabarrena, stopping the Iranian, who was isolated for goal, was sent off. The home team was thus left with one less, and the game was favourable to Porto, three minutes from the end of the first half, Taremi would score again after an incomplete defence by Trigueira and Uribe’s free-kick.

In the second half, FC Porto managed the game and the fatigue accumulated with the Champions League game, and was almost surprised by Tondela, when Pepe lost the ball to Dadashov and must commit foul, which earned him a yellow card.

Porto reacted and Marcano scored but was invalidated due to offside, by Luis Díaz, it was then that the man of the game, Taremi, scored again, with assistance from Fábio Vieira, the Iranian is now also in the lead of the best scorers, with seven goals.

Porto is waiting with Sporting, the result of Benfica, which plays today with Vizela, to find out if it will share, with Sporting rivals, the first place, both with 23 points. Tondela, with 9 points, is in 11th position in the table.

Miguel Oliveira will start from 14th place in Argentina 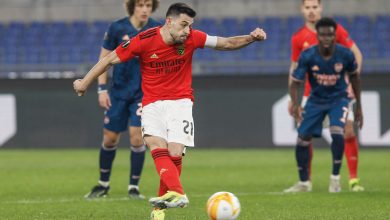